AAC in the time of the mobile devices

With the advent of thin consumer tablets and contemporary mobile devices in general, many specialists in the domain of Augmentative and Alternative Communication (AAC) saw the their potential use for symbol-based AAC as a alternative to often clunky, expensive and restrictive dedicated AAC systems. In a relatively short period, many AAC solutions have emerged. But, with their design, some of them disregard the variations in devices screen sizes and difference in it’s users’ abilities, which can result in restriction of access instead of it’s promotion. And it’s not just the interfaces of the tablet-based AAC systems. In many cases, the symbol sets present in the application differ from the familiar symbol set the user uses. The symbol set designs also restrict access. Some symbols use images that aren’t part of the user’s culture and don’t take into account the specific requirement of the user’s language. Many of the popular symbol sets are designed way before the “mobile revolution” and don’t utilize technological advancements like high-resolution screens and support for the display of vector image formats. Also, many of the symbol sets have only one visual variant, forcing user’s with different needs and abilities to use a different set, making the communication between AAC users harder.

Although this case study is most relevant to the graphic designers, user interface designers, user experience designers and developers of symbol-based AAC systems, it could provide useful information to other stakeholders who are involved in creation and preparation of visual AAC aids. 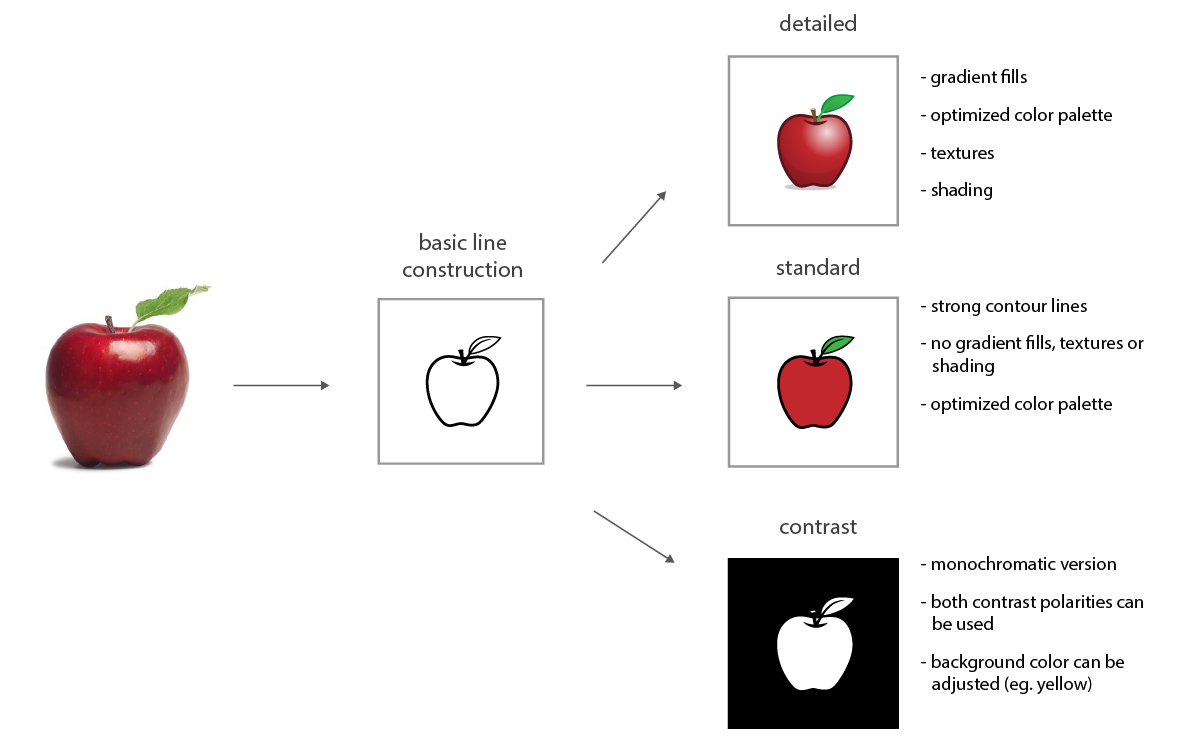 Our task was to design a several AAC applications for Croatian users. Considering the needs of Croatian AAC users and stakeholders and the lack of AAC solutions on the market at the time, we have decided on developing an adaptable system of AAC symbols and GUI elements in the effort to make our AAC solutions accessible to wide range of different AAC users. Our adaptable symbol system consist of three different levels of visual complexity(standard, detailed and contrast) which are based on the same basic line construction, making the symbol adaptable to different user needs and preferences, and different means of reproduction, while retaining the recognizability. We further developed a method of visual categorization of symbol categories, which is based on the combination of shape and colour, but can be adapted to fit the user preferences.

We wanted that the graphical user interfaces supports multiple device sizes, different user abilities and preferences. We have developed adaptations in layout of the GUI elements, their number and dimensions, and also the adaptations of the visual reproduction which is in accordance with the level of visual complexity, but can also support user personalization. The ability of the quick generation of prototypes and iterations during the design of the graphical user interfaces was important to discuss the solution and test them with the stakeholders. Although low and medium fidelity paper prototypes proved to be great for testing ideas and discussions within the design and development team, most of the testing and communication with the stakeholders required semi-functional or functional high-fidelity prototypes. 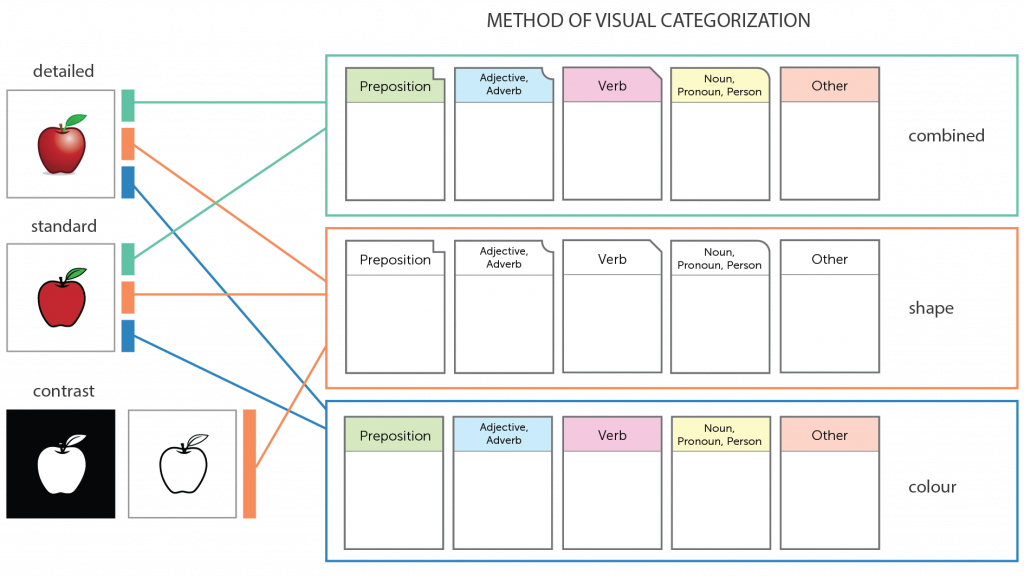 During our research, design,  development and testing of adaptable and adaptive symbol-based AAC interactive systems, we have established a set of guidelines which might be useful to creators of such AAC solutions and assets in improving usability and accessibility of such systems. We have separated the guidelines for designing graphical symbols. 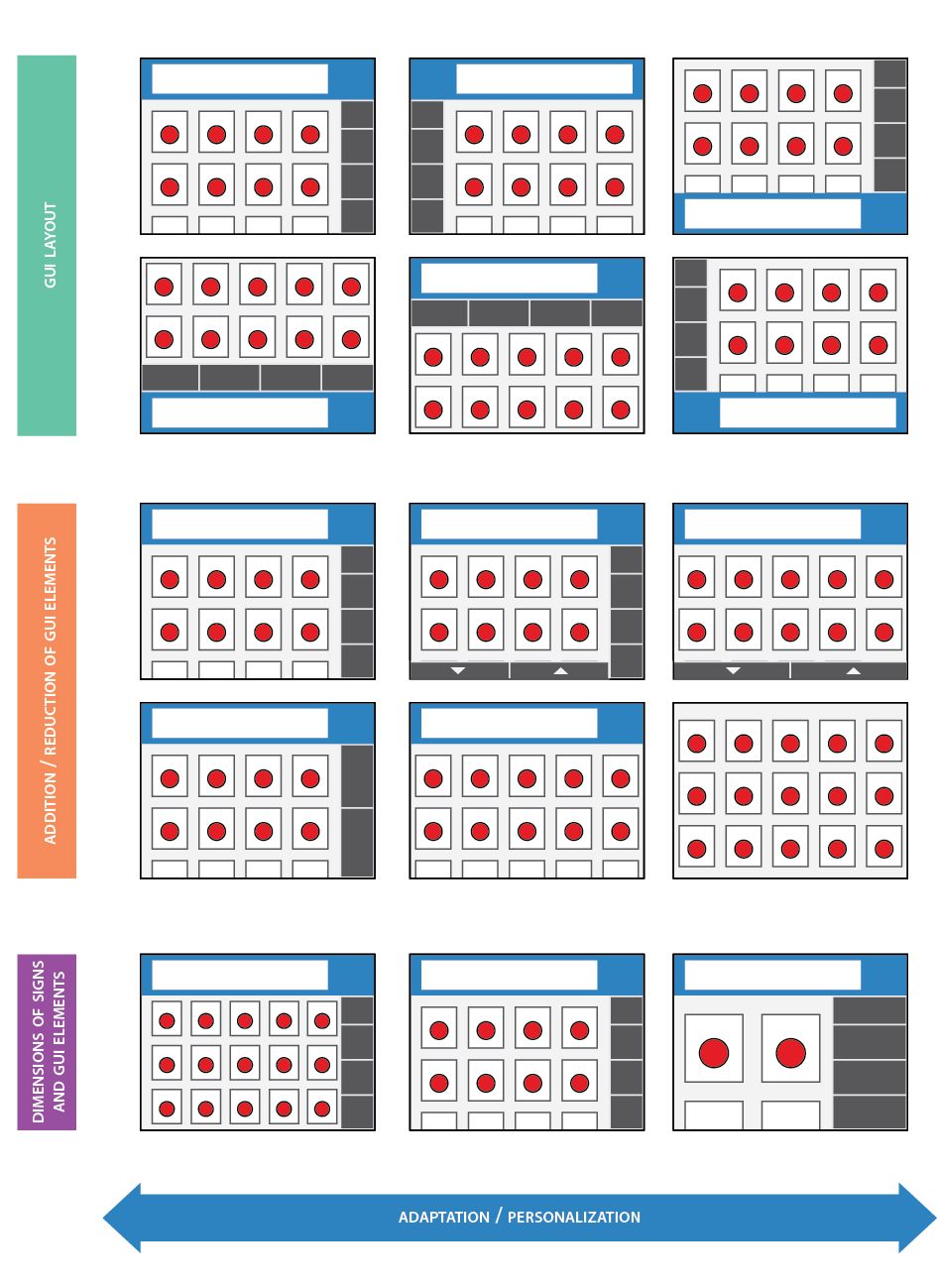 Guideliness for the design of adaptive and adaptable Graphical user interfaces (GUI) for symbol-based AAC: 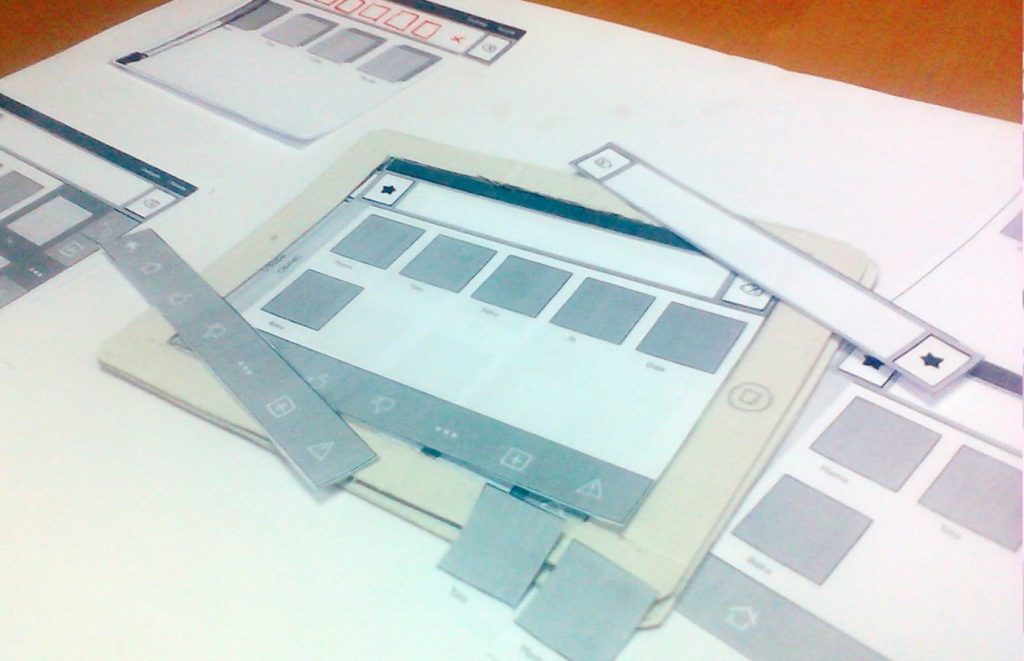 Image 4. Early design prototype of Komunikator+ app, made from paper and cardboard

In regard of the tools to design symbols using vector graphics, although we have used Adobe Illustrator CC, which is considered one of the most widely used tools by professionals, there are more affordable solutions, such as Affinity designer, Sketch, or Inkscape, which is free.

As for the design of the graphical user interface, it can be done in any of the aforementioned programs, but there are more specialized solutions, like Sketch, Figma and Adobe XD. Some of solutions, like Invision, enable simulating some of the functionalities without coding, which enables the design team to quickly setup and perform usability tests with the users.

Although the symbol set is still in development, many of our guidelines for designing GUI for AAC are applied on the design of the “ICT AAC Komunikator+” app, which is available from the App store for free. 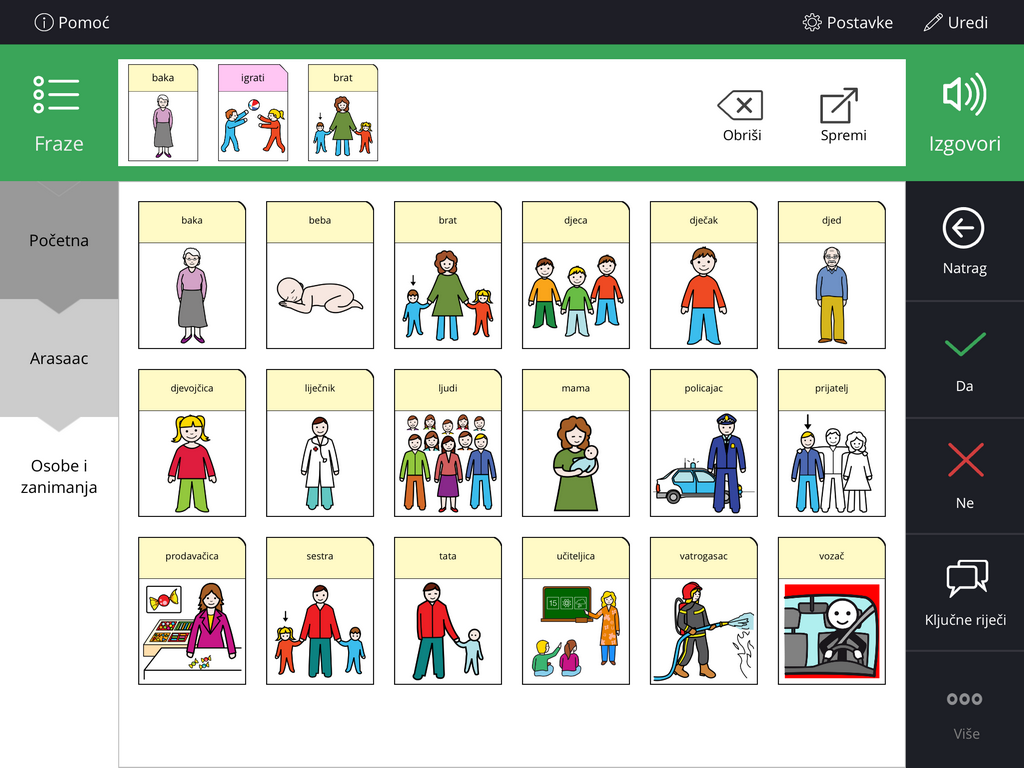 “The European Commission support for the production of this publication does not constitute an endorsement of the contents which reflects the views only of the authors, and the Commission cannot be held responsible for any use which may be made of the information contained therein.”

"The European Commission support for the production of this publication does not constitute an endorsement of the contents which reflects the views only of the authors, and the Commission cannot be held responsible for any use which may be made of the information contained therein."